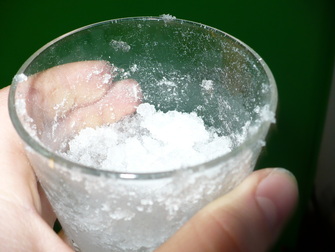 What you need
Water
Sodium Polyacrylate(found in diapers)

The purpose of this lab is to demonstrate the affects of adding the water directly to the Polyacrylate.

Step 2: add desired amount of water, and you have fake snow.

Step 3: want to make the snow more realistic put it in the freezer!

Their you go you have fake snow. The snow will dehydrate after a period of time, just add more water.

Focus questions:
How does polyacrylate absorbe water?
Why do we use polyacrylate in diapers?
Does it make sense that the same polymer is sometimes used for plants?
Did you know the  the Polymer polyacrylate can hold more the 200 times or more then its weight in water!
Helmenstine, Anne. "How to make fake snow." About. N.p., n.d. Web. 9 Mar 2011. <http://chemistry.about.com/od/chemistryhowtoguide/ht/fakesnow.htm>.